Babywearing Around the World: Asia

I thought I would do a short series on babywearing around the world.  Although babywearing has become somewhat of a new fad among the US culture, you can thank the 60’s for that, it has actually been around for much much longer.  All around the world women have been using kangaroo care to keep their little ones close and safe.  Whether in a sling or a wrap, these baby carriers allow for women to go about their lives, many farming or walking miles while with their baby on their back.  It is quite a beautiful thing to see a mother and baby snuggling together.  So let’s take a little stroll through history and see the origins of some of our favorite carriers.

China the birth place of the Mei Tai, if you were to look at a map of babywearers you would see that Asia and its surrounding areas prefer one type of carrier to another.   That is the Mei Tai.  A Mei Tai carrier looks like a square with 4 long bands coming out from the sides.  The basic idea is that you place baby in the square section and then use the straps to wrap around and secure the carrier, the straps are generally 4 inches wide and 68 inches long.  That was a difficult way to explain it.  But you get the idea.  This type of carrier comes in many different colors and styles.  Some United States companies have even started manufacturing this style of carrier with great success.  Babyhawk is one of these.  They specialize in fun prints and colors, and you can actually design your own Mei Tai.  They also offer a reversible option, so you could have girly print on one side and your husband could have something else on the other, very innovative.  There are tons of other Mei Tai makers out there so if you are interested in picking one up it doesn’t take more than a Google search to pummel you with choices.

So back to the history lesson, who knew that history degree would actually come in handy for something?  The name Mei Tai come from the words Mei – to carry on the shoulders and Tai – belt; band/bring.  These carriers have been used in Asia for thousands of years.  They didn’t come to our attention until they were made popular in Australia in the 1960’s and then crossed the ocean to us.  The Asian style carrier, or Mei Tai is extremely versatile.  While many carriers can only support a few positions and body types, the Mei Tai has endless possibilities. 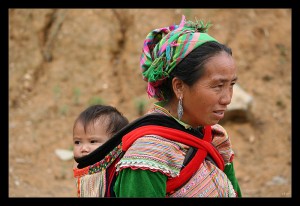 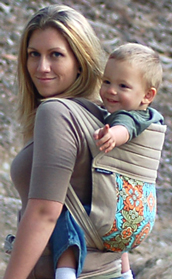 Another popular carrier in Asia is the Korean Podaegi this carrier is very similar to a Mei Tai but with some key differences.  “Traditionally the rectangle is quilted for warmth and wraps around the mother’s torso, while the straps are wrapped snug under the baby’s bottom and tied around to the front to support and secure the baby on the mother’s back.” (Wikipedia)  This carrier doesn’t have to have shoulder straps but the ones avaiblable today often do.  Other Asian style carriers can include wrapping and the Onbuhimo from Japan; it is almost identical to a Mei Tai besides it has rings at the bottom to thread the straps through rather than wrapping it around the body. 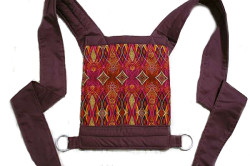 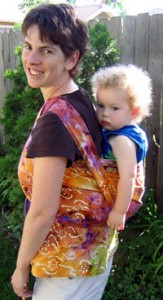 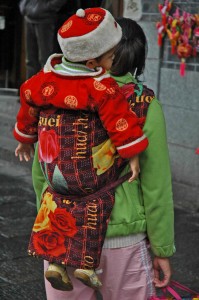 So there you have it the origins of all those Asian style carriers that you love so much.  Next time we will visit the Southeaset Asia and India, home of the Sling.

Jazz is mommy to a busy toddler, Axel, that she babywears, cloth diapers, attachment parents and feeds organically. Between being mom and wife to Stephen, a nursing student and Navy Corpsman, she is getting ready to work on her graduate degree in Indigenous Studies. Jazz loves all things natural and can't wait to bring more beautiful blessings into the world and grow her eco-happy family!
View all posts by Jazz →
This entry was posted in Baby Wearing and tagged asian style carrier, babwearing, china, mei tai. Bookmark the permalink.