As an ex elementary school teacher I have attended many conferences, meetings and in-services about disciplining children with dignity… and becoming a parent has given me a whole other perspective.

There are so many options when it comes to disciplining your children while keeping their dignity intact. When your child is not listening try one of these options:

1. Natural or Logical Consequences: Letting a natural consequence occur (as long as your child is not in danger) or stepping in to create a relevant consequence.

2. Withholding Privileges: Your child will have to give up something that they love if they do not cooperate. Never take away anything they need such as a meal.

3. Time Out: This is best used with kids ages 2-5 and when a specific rule is broken. Allow for a warning first, and then use a safe (and boring) spot for time out.

** Keep in mind that children develop at different rates and have different strengths & weaknesses. Make sure your child fully understands what you are asking of him/her.

** Be Consistent by making sure your rules stay the same. Children will push the limits to find out where their boundaries are. If the rules keep changing, kiddos will keep pushing.

** Know your child’s feelings so that you can look for patterns. This way you can help your child work through any emotional or social issues rather than just giving consequences.

** We tend to want to react right away but if you wait to think before you speak, you can make sure you are being realistic. Once you make a promise or a rule, stick with it.

** If your little one starts to throw a temper tantrum (even if it’s in public) don’t give in. Don’t be embarrassed. Everyone with a kid has had this happen more than once. Take a deep breath and know that you are always in control. Don’t encourage bad behavior by giving in.

** Most importantly, don’t stress if you don’t handle a situation well the first time. Allow yourself to cool down if you feel like you made a mistake in the heat of the moment and always keep your promises.

Why I do not spank… 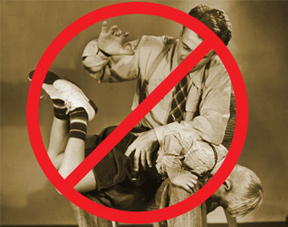 In our society you cannot hit your spouse, dogs, co-workers or any other adult… BUT it is “okay” to hit a child if we say we are disciplining them. We (adults) can’t get things right a lot of the time but we expect kids to… and then hit them when they don’t – that just doesn’t make sense to me.

Yes, it takes more time to disciple with dignity and sometimes I think it would be nice to have a ‘quick fix’ to a kicking/screaming tantrum, but I know that I am helping my child problem-solve. I know that in the long run using positive discipline will be better for them and for me.

The American Academy of Pediatrics does not recommend spanking. Although most Americans were spanked as children, we now know that it has several important side effects.

Even though spanking may seem to “work” at first, it loses its impact after a while.
Because most parents do not want to spank, they are less likely to be consistent.
Spanking increases aggression and anger instead of teaching responsibility.
Parents may intend to stay calm but often do not, and then regret their actions later.
Spanking can lead to physical struggles and even grow to the point of harming the child.

It is true that many adults who were spanked as children may be well-adjusted and caring people today. However, research has shown that, when compared with children who are not spanked, children who are spanked are more likely to become adults who are depressed, use alcohol, have more anger, hit their own children, hit their spouses, and engage in crime and violence. These adult outcomes make sense because spanking teaches a child that causing others pain is OK if you’re frustrated or want to maintain control – even with those you love. A child is not likely to see the difference between getting spanked from his parents and hitting a sibling or another child when he doesn’t get what he wants.

Source: Discipline and Your Child (Copyright © 2009 American Academy of Pediatrics)

One Response to Discipline with Dignity