My VBAC – A healing birth

Posted on June 15th, 2011 by LittleBirdsMommy

To say my son’s birth was a bit traumatic would be an understatement.  It was the hardest and scariest day of my life.  (You can read about it here.)  So as my daughter’s estimated due date approached I began freaking out.  FREAKING OUT!

I wanted a VBAC. My first OB refused to allow it, instead wanting to c-section me at 38 weeks.  Luckily she told me this at our first visit so I had plenty of time to find a new, VBAC supporting OB.  While my new OB supported a VBAC she had 2 stipulations 1) she didn’t want me to go too far past 40 weeks because I had my c-section at 29 weeks and 2) that VBAC’s are seldom induced so if I hit 41 weeks and no baby we would have to schedule a c-section. The idea of having another c-section scared me.  For me a c-section meant the loss of all control, it meant trauma and a long and painful recovery.

So as 39 weeks arrived and then 40 I started to lose my mind.  I tried EVERYTHING I could to go into labor on my own – even acupuncture.  It didn’t work.  Luckily everything I had tried, while it didn’t send me into labor, did get my body ready for labor and because of this my OB decided I was a good candidate for an induction.  I had mix feelings about this, but an induction sounded better than another c-section so on Friday May 27th, 2011 I checked into the hospital, birth-ball in tow.

I asked if we could be in a room with a tub, in hopes that even with an induction they might let me labor in the tub.  It was a nice room with enough seating for my husband and our doula.  My OB’s original plan was to start me on Pitocin and then break my water an hour later. Well, I wasn’t okay with this plan, so I asked for a change. Instead of starting with Pitocin I asked for my water to be broken first, then I got to give me a few hours to get labor going on my own before starting drugs. My OB agreed and I got 2.5 hours to see what happened. During that time, I walked the halls while on the portable monitor.  We walked and walked,  after awhile I decided to make use of the tub. I wasn’t having any contractions, so it wasn’t a “pain relieving” soak, but rather a really refreshing one.  I washed away my worries and got myself into the mind set to get my VBAC.

They started Pitocin at 10:30am – at this time I was 1-2cm and 80% effaced. The plan was to up the Pit 2 miliunits every 30ish min. I immediately started having regular contractions that were moderately strong. I just breathed through them. We tried several positions but much to my surprise I found I really just wanted to lay on my side in bed. They inserted a IUPC to better monitor my contractions and upped the Pit to a 4 about an hour later. At that point my contractions got harder and I found that I could only get through them by holding my husband’s hand. My doula would rub my back and legs during the contractions which helped so much. We listened to my birthing playlist and I just focused on making it through every contraction.

At 2:15 they checked me and found I was 100% effaced and between a 5 and 6! Huge progress and the Pit was still really low, they upped it to a 6 and never had to up it again! The OB said that since I was having regular and strong contractions they wouldn’t need to increase it again and that many women need the Pit at a 20 to reach the level I was at. I was so relieved. I asked her at this point how much longer she thought this would take. I just wanted a rough idea so I could rest if need be. She said that 6 more hours wouldn’t be unheard of and most inductions take around 12 hours. I started to mentally prepare myself for 6 more hours.  I’ll admit that at this point I thought about pain medication, but my husband and doula followed my instructions and talked me out of it.

At about 2:30 things suddenly got much more intense. The contractions started getting stronger and I needed to moan to get through them. I also needed a cherry Popsicle, which my lovely doula gave me bites of between contractions. We called the nurse back in and I was at a 7 and our baby was right at the cervix (0 station). I didn’t realize it, but this was transition. During this time of increased intensity the thought running through my head was “Oh gosh, it hurts this bad and I have 6 more hours and to get through transition!”

9 min (yes, NINE – my doula recorded the time) later I got hit with the need to push. And it was a NEED. I felt our baby drop even lower, she was ready! I was checked and told I was complete – a 10 and that our baby was now at a +1 station. I was told I could push when I wanted to. Then everything started going REALLY fast. A new OB came in, a doctor I had met before and really liked, because mine had left the hospital only a few minutes before to check on another patient since we all thought I’d be laboring much longer.

I moved to the end on the bed and sat in a modified supported squat. They brought in a large mirror on a stand and I was able to see our baby’s head. It wasn’t until that moment that I came to terms with the fact that this was really happening. I was going to VBAC, I was going to see my child the moment she came into the world. My husband says he could see the change in me the moment I looked into that mirror. It was amazing. Just a few pushes later and she was out. It seemed like all at once too. I kept waiting for the “ring of fire”, but it didn’t come. I just leaned into my husband’s shoulder, screamed and pushed her out! Yes, I screamed. No words, but a deep scream that helped me do what I needed to do.

Our baby girl, Miss A, was born at 3:09pm, less than 7 hours from when they began the induction. I saw her laying between my feet on the bed and without any hesita 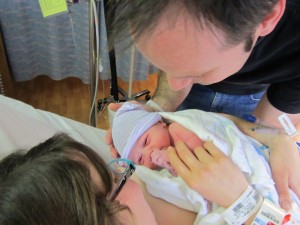 tion I reached down and picked her up and brought her to my chest – even before they cut the cord. They did all the exams, APGAR scoring (8,9,9), etc right there in my arms. Holding her, knowing that my body did what it was built to do, healed me from the trauma of our son’s birth.

Having a VBAC was the right choice for me. And having it induced was too, she was ready and so was I – we just needed a little nudge. Everything worked out wonderfully, even with it being Pitocin induced I labored without pain-meds and had as “natural” a birth and I could given the circumstances.

Our baby was still tiny at 40 weeks, 4 days – only 6lbs 6oz. I shudder to think what would have happened if I had had a repeat c-section at 38 weeks like my original OB wanted to. I have no doubt she would have ended up in the NICU – I don’t know if I would have been able to handle that again, especially if it could have been prevented.

It was an amazingly healing day. I’m proud that I was able to make choices regarding her birth. I chose to labor in my own clothes, when I voiced concerns about something I was listened to and my choices were respected. I had some control and after my son’s birth where I had zero control, this made a huge difference. After G was born I just felt this great emptiness, now I felt complete.

I'm "Mum-Mum" to my super-strong 29 week preemie, G, who is now an amazing 2-year-old and our newest arrival the sweet Miss A, who joined our family in May. I work from home and try to find a balance between home and work, "crunchy" and corporate.
View all posts by LittleBirdsMommy →
This entry was posted in Birth and tagged birth story, doula, healing, labor, VBAC. Bookmark the permalink.

2 Responses to My VBAC – A healing birth